This was my first ever visit to the Old Fruitmarket venue in the Candleriggs area of Glasgow. Beautiful venue and pretty good acoustics.

Indie/folk band First Aid Kit consists of Swedish sisters Klara and Johanna Söderberg, who have been gathering fans since the release of 'Drunken Trees' EPs in 2009. They then released two albums ‘The Big Black and The Blue’ and ‘The Lion’s Roar’. I first heard them on a late night Radio 6 Music playlists back in 2010 performing Screw Me Up And Throw Away, and made a note to find out more about them (* See note at bottom and comments related to this track)

The two men in the band, Melvyn and Niclas came on to a recorded backing tune, more ambient than anything else, and settled into their seats, gradually adding some steel guitar and drums to the mix before Johanna and Klara burst onto the stage.

The venue was pretty full and their arrival was greeted enthusiastically by the very mixed crowd. I was quite impressed by the 1970s (and dare I say Abba) inspired outfits :-)
They kicked off their set with Stay Gold, the title track from the new album and also the wording on Klara's very new guitar strap. It was a good start - the sound was great, the harmonies excellent, and Melvyn's pedal steel guitar was glorious (note to self - investigate more Melvyn Duffy).

Klara tends to take the lead in crowd interaction, and after the opener she thanked Jo Rose for opening for them, and mentioned that he was ok (see details below). She talked about the beauty of the venue, their new album produced by Mike Mogis and introduced the band.

Blue was next with such beautiful harmonies. They are, in my opinion, more country than folk, but the new album definitely mixes up the genres a little more than previous offerings.

The Waitress Song sounded like a sweetly sung diary entry:
I could move to a small town, and become a waitress
Say my name was Stacey and I was figuring things out
See, my baby, he left me and I don't feel like staying here tonight 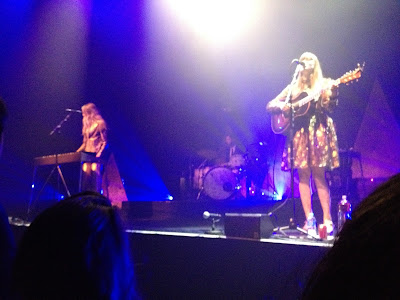 It's hard to explain the attraction of First Aid Kit to someone who has never heard them, but the next couple of tracks would be a good place to start. Shattered and Hollow, and Cedar Wood have melody and harmonies to die for. At several points the pedal steel and the soaring harmonies made me think of an unlikely alliance between Gram Parsons and the Cocteau Twins.

It was hot, damn hot, in the Old Fruitmarket and Klara took a break to swig from a 2 litre bottle of "sugar free" Irn Bru, much to the delight of the crowd. She passed the bottle to Johanna, saying "we can't get this in Sweden - have a taste". Johanna impressed everyone by drinking the best part of a litre!

The next track was Ghost Town and they did this from the front of the stage, no microphones, and guitar unplugged. This was obviously a well rehearsed move, the vocals were strong, and slowly but surely the crowd began to sing along until by the end Klara let the audience do some on their own! This was one of the real highlights of their set, and it sent shivers down my spine.

My Silver Lining was good, but there was a fluffed line or two. In the Hearts of Men didn't start at all, as Johanna lost the intro and asked to do something else, but these were very minor and the rest of the performance was polished perfection.

One of the other highlights was the Jack White cover Love Interruption. Melvyn abandoned his pedal steel for some real rock guitar and the crowd were jumping.

The Lion's Roar was an uptempo finish to the initial set, and they rounded off the encores with their cover of Paul Simon's America, Master Pretender and Emmylou, a real crowd pleaser.

Setlist:
Stay Gold
Blue
King of the World
Waitress song
Shattered and Hollow
In the Hearts of Men (abandoned)
Cedar Wood
Ghost town
My Silver Lining
Wolf
Love Interruption (Jack White cover)
Heaven Knows
The Lion's Roar
-- Encore --
America (Paul Simon cover)
Master Pretender
Emmylou
-----------
* Screw Me Up and Throw Away is not by Johanna and Klara, but rather a Spanish duo of the same name (Agnès Aran and Carles Querol). So I was mistaken when I began to investigate the Swedish duo on the strength of this late night listening, however the internet is full of references attributing the song to the Swedish Duo. Anyway, thanks to my anonymous contributor for pointing this out.

Jo Thomas Rose is a singer-songwriter from Manchester. He was previously a member of the alternative rock band Fear of Music. His debut solo album Spurs was released on 21 August 2014.

Jo has recently been working closely with Klara of the Kit on a few projects, and I did hear from someone in the crowd (obviously someone with a lot more music related info than me) that there is a romantic connection between the two.

He came on stage to a warm, but not rapturous, welcome, and chatted away quite happily for a while. Jo is quite quietly spoken (more American than Manchester), but really did engage with the audience. He talked about the new album and how it was available for download or as a CD from the merchandise stand at the back. He even mentioned that we might download it from bit torrent or another freebie download site, but he hoped not. He mentioned that Klara (from the Kit) was on a couple of the tracks.

Thoughtful, and often clever lyrics, a good voice (belied by his soft spoken tones) and some neat acoustic guitar made this a perfect opener for First Aid Kit.

I really enjoyed his set, particularly The King Of Your Blue Eyes and I'm Yr Kamera

However, after saying he'd see everyone at the merchandise stand a little later (no need to buy, happy to shoot the breeze) he seemed a little distressed, constantly touching his head or adjusting the mike stand, and mid-way through his final song, he collapsed onto the stage, face first onto his still strapped on guitar. Turns out he is epileptic, and this was a short fit, possibly brought on by the heat in the hall.
There was a long break while the medics (from the venue and the crowd) attended to Jo, and then he was lifted into a standing position supported by the stage crew to much applause from the crowd and helped off stage.