My first ever visit to King Tut's and I was suitably impressed. The posters lining the walls downstairs pay homage to the bands who have played in the past - from memory these included: Oasis, Radiohead, The Killers, Pulp, Biffy Clyro, Manic Street Preachers, Snow Patrol, Frightened Rabbit, Idlewind, Teenage Fanclub and Paolo Nutini. A really nice touch is the list of artists by year painted on each of the stair risers leading up to the performance area. Good beer, great pre-gig food, cheery service, and a quirky but really intimate gig venue upstairs.

The Ting Tings are  Katie White and Jules De Martino and this gig was the 4th in the tour to promote their new album Super Critical, released on 27th October 2014.

I enjoyed their first album We Started Nothing, but their next release Sounds From Nowheresville was a little inconsistent.

Highlights from the new album were Wrong Club, Only Love, Do It Again and Communication, and a good proportion of the audience knew every word, but the stand-out songs in this live performance were still Shut Up and Let Me Go and a raw slow-starting version of That's Not My Name that increased in tempo and completed the first set. 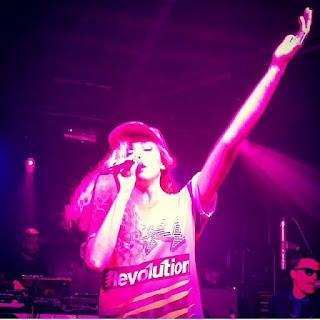 The whole performance was memorable for a couple of things other than the powerful, singalong, dance tracks and the high energy chemistry between White and De Martino:
I was surprised at how accident-prone or spatially unaware Katie was on stage - the stage crew regularly dashing on to re-erect pieces of kit that she had knocked over. Perhaps that was down to the large shiny baseball cap (to keep her flowing locks in place) which kept slipping down over her eyes :-) 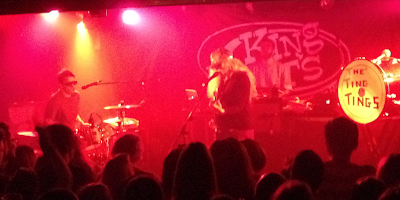 I was also initially quite impressed with Katie's chucka-chucka guitar, while Jules laid down more guitar and drums, as I had not thought she played that much. However I began to notice that for every track, each guitar handed to her was pre-set with all the controls taped up to prevent adjustment, and there were predetermined chord positions marked on the back of the guitar neck. I subsequently discovered that this is just the way she always keeps on top of unnecessary tuning/adjustments etc. but it did make me smile.

Despite that, the sound was excellent and the vocals (solo and harmonies) were spot on.The crowd were appreciative and bouncing so much that, on more than one occasion, I had to realign my pint glass on the rail in front of me as it kept edging forward threatening to douse the poor punters just below me.

Overall a hugely enjoyable set, and even if you are not a fan, I would recommend seeing The Ting Tings live just for the experience.

Ted Zed is the alter-ego of Somerset based Edward Griggs. He jumped energetically onto the stage, guitar strapped on, looking like a young Jim Morrison (just a lot more cheerful) and his two fellow band members followed.

The set-list was a real mix of retro sounding rock n roll, some very dance-oriented funk tracks and several out-and-out pop numbers. At times I was reminded of Bowie, then Bolan, with touches of Clapton-esque guitar, and throughout the bass and drums provided a gloriously punchy sound.

Although referencing multiple influences, the songs were never ordinary; there was a uniqueness that made Ted's performance interesting and fun.

The man himself couldn't stop grinning and frequently engaged with the King Tut's crowd - "I heard you were all really loud here, c'mon make some noise" and "This one's really funky, let's see some dancing" and on each occasion the crowd responded enthusiastically.

Definitely an act to look out for in the future, and certainly worth seeing live.