This was the fifth pre-Xmas music-fest organised by Kid Canaveral and the second involving Lost Map records. It was also the second time that the venue for this event was the lovely Portobello Town Hall.

A truly eclectic lineup had been drafted in to perform - with Lost Map stalwarts (and hosts) Kid Canaveral, but also a heap of other musical styles and the surprise headline act, Ibibio Sound Machine.

As per last year's event the organisation and attention to detail was excellent, with local brewers William Brothers supplying the beer, the gig was due to last from 2:30 until midnight with a break for food from 5.40pm to 7pm.


Hosts, David and Kate Canaveral had already provided ticket-holders with a wealth of information and some do's and don'ts e.g. "Please do not bring any of your own booze into the venue, even if you think you've been terribly clever about concealing it. It's a condition of our licence and we'll only take it off you and drink it later whilst writing devastatingly witty, unkind things about you on the internet." :-)
This was definitely the "must go to" pre-Christmas bash for 2014.

Line-up and order of play was: 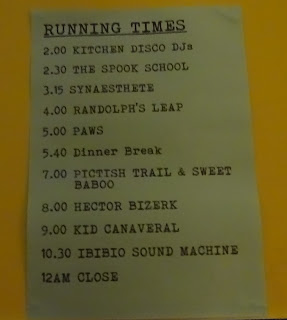 Kitchen Disco DJs
Throughout the night, while cunningly clothed in Christmas lights and offering plates of home made Christmas treats at the turntables, Kitchen Disco kept us entertained with a fine selection of toons. 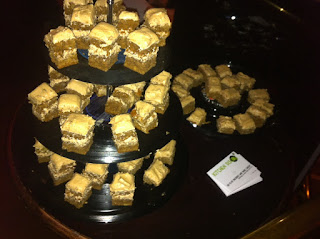 The Spook School
Nye Todd (guitar & vocals), Adam Todd (guitar), Anna Cory (bass and vocals), Niall McCamley (drums)
Spook School started the event with some loud, post-punk, indie songs. Drummer Niall did the between songs chat and at one point invited us all back to Adam's flat for some vegan cheese - "I've got so much vegan cheese" Adam told the crowd, but didn't give out his address.
Adam was impressive on guitar, Nye provided most of the lead vocals in fine style, although Anna's voice was also great when she led. Drums and bass pretty prominent, but definitely guitar-led, they were slightly marred by echoey sound. Nonetheless Here We Go and Will You Always Be My Friend were particularly good, and despite Portobello Town Hall being less than half full, there was still some bouncy dancing going on. I would like to see them again with better sound.

Synaesthete
Next up was Sarah Tanat-Jones aka Synaesthete. She was previously involved in a couple of groups (Radials and Come On Gang!) but recently embarked on a solo career with her debut album Array. Responsible for the Baubles V official poster above, Sarah regularly combines art and colours with sound as befitting someone who benefits from that rare gift synaesthesia.
As a solo performer, her set was heavily tape-loop and drum machine driven, but lovely vocals and very melodic. Sarah even got the Portbello crowd participating in some clap-along numbers in her Kate Bush meets the Burundi Drummers tracks. Really good set. One track entitled "You Only Call Me When You're Drunk" was an fine addition to a gig where Kid Canaveral performed their "You Only Went Out To Get Drunk Last Night" :-)  My interest was piqued enough to subsequently purchase the Array CD and accompanying artwork.

Randolph’s Leap
The Leap were earlier in the proceedings than I had expected, but what a great set.

They were on top form, and all their recent gigging has helped to provide some light and shade in their performance. Weatherman and I Can't Dance To This Music were highlights, but an almost a cappella version of Natural was my favourite song of the set despite a wee glitch in the lyrics by Adam. 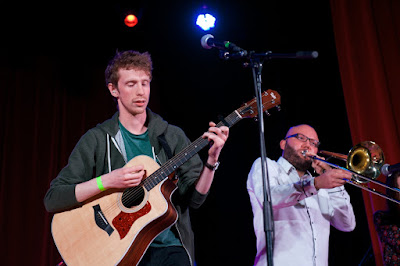 This was a really professional and well performed set by the Leap. Songs were: Goodbye,
Microcosm, Natural, Foolishness of Youth, Weatherman, News, Hermit, I Can't Dance and Clumsy Knot. Definitely my favourite set of the afternoon, and I suspect that view was shared by much of the audience, shown by the fact that the crowd made a real clapping, chanting attempt to get them back for an encore. Unfortunately time was tight and there were many more bands to come, so no encore.

PAWS
David Canaveral introduced PAWS as "the band who had a stand-up fist fight with Morrissey". This is related to an event in May 2014, in Santa Ana in California where, through social media, they and another band (We Are Scientists) gained almost cult status when they ran foul of Morrisey's management. Read the background here. 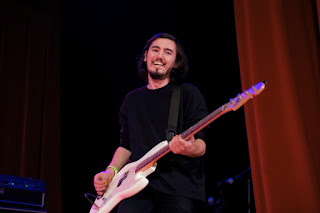 This evening the band themselves, to their credit, were keen to play this down.
They were formed from the ashes of a Glasgow-based band called “A Copenhagen Hope”
After the departure of one of its founding members (Nick Anderson) the remaining three friends (Phillip Taylor, Josh Swinney and Matthew Scott) formed PAWS.


In Porty Town Hall they were loud and rocking, possibly just too loud as the quality suffered a tad. However as the last set before tea-time, they really got the crowd jumping.

Food Break
Next was a break for dinner and we dashed off to get a table in the nearby Bonoful (Bangladeshi & Indian Restaurant). The food was excellent, service was pretty quick and the Bangla Beer (new to me) was delicious!

The Pictish Trail and Sweet Baboo
Johnny Lynch along with his new Moshi Moshi labelmate Stephen Black were in the post dinner slot, and their's was a gentle, hugely enjoyable and very humorous set with each taking turns to perform songs backed by the other. 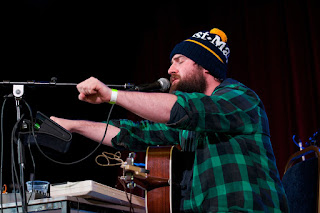 Their recent tour has obviously resulted a well rehearsed and fun set. If you get a chance to see 'em both live - just go - you won't regret it.

Hector Bizerk
After releasing the SAY Award-nominated ‘Nobody Seen Nothing’ Louie and Audrey have been touring for some time. The time on tour has resulted in a pretty slick performance. Louie is the rapping wordsmith and Audrey is his guitarist and drummer. Not sure who the bassist was, but he was good, we were also treated to some live art on a large canvas at the back of the stage, and a break-dancer-cum-flag-waver. 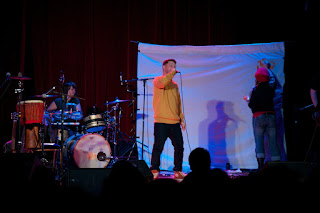 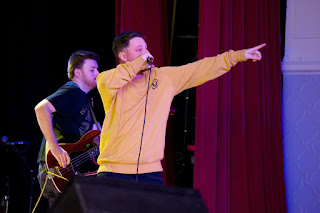 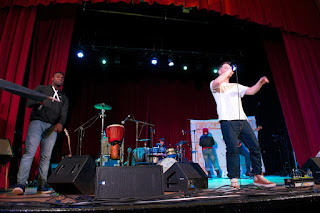 I'd seen Louie once before as a guest in a gig in Easterhouse to raise cash for the Cairn String Quartet's trip to Austin Texas (for the South by Southwest SxSW festival), and was impressed with his brief appearance then. This was a much more extensive set, backed by a band, and when David Canaveral introduced them as "hypnotic" he was spot on. Despite not always making out the lyrics, it was a really good set and far more fun than I had expected. They certainly warmed the crowd up for the next act.......

Kid Canaveral
Our hosts for the afternoon then to took the stage, armed not only with their usual Buckfast refreshments but also David's "Most fabulous Xmas decoration ever" - an illuminated Buckfast bottle.


Unfortunately, the "Most fabulous Xmas decoration ever" which was plugged into David's guitar pedals for power, caused the pedals to fail, much to the delight of the crowd and the mock exasperation of the other Canaverals. David scrabbled around for an alternative power source and we were off.
Despite this initial glitch, the Canaveral's set was particularly good, starting with the seasonal Low Winter Sun and rolling through their best known numbers, pulling out all the stops. In particular Kate's guitar playing was excellent, and their new keyboard player, Michael Craig, added extra depth on several tracks.
Setlist - Low Winter Sun, And Another Thing!, Skeletons, Good Morning, Without A Backing Track, Her Hair Hangs Down, Who Would Want To Be Loved, The Wrench, You Only Went Out To Get Drunk Last Night and Compromise.
This was one of the best KC performances I had seen, and probably my favourite set of the evening session.

Ibibio Sound Machine
ISM were the surprise headliners for Baubles V, though perhaps the fact that they share an agent with Johnny Lynch meant that it should not have been such a surprise :-)
Fronted by London-born Nigerian singer Eno Williams, Ibibio Sound Machine is a mash-up of African and electronic elements of West-African funk mixed with post-punk and electro. Weird and wonderful folk stories, recounted to a young Eno, in her mother's Ibibio tongue, by her family form the basis from which the band's unique musical sound is generated.
They were dance music through and through. The Ibibio lyrics were well beyond my limited linguistic skills, but the band were excellent and Williams, sounding great, was an eye-catching centrepiece in her impressive shoulder-pad and hips dress. 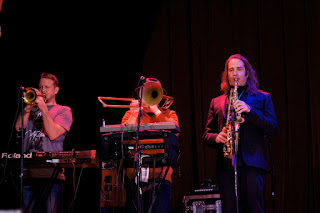 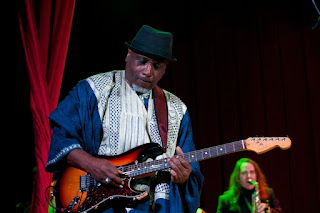 Portobello Town Hall came alive with some exceptional dad-dancing among a simmering dance-club crowd, and as things warmed up, hats and jackets were abandoned. A fine finish to a really good afternoon and evening.

The evening session in particular was a glorious mix of Scottish Indie, hip-hop and Afro-electric funk. Well done Kid Canaveral and friends for this fifth installment of Xmas Baubles. Just remember to order more beer next time - bar was drunk dry by 11:00pm!