Under the auspices of Creative Scotland's Youth Music Initiative, these 3 bands were able to record and launch their music. 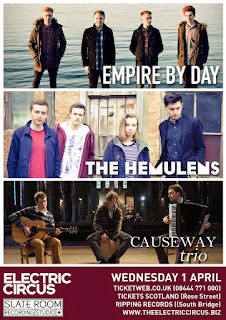 Formed in early 2014, this gig was the promotional launch of their debut single, released 30th March. The single features two songs – Some Kinds of People [Lauder] and She Said [Murphy]. Both were recorded in December 2014 at Castlesound Studios in Edinburgh and produced by Craig Ross (Broken Records).
I'd heard the preview versions of both the tracks and was impressed enough to immediately buy tickets for this gig.
The Electric Circus was not as busy as I had hoped for The Hemulens, but with the place more than half full, they took to the stage and quickly set up their gear.  Tight timelines with 3 bands in an evening and no roadies to assist, they were ready in 5 mins.

First song was Look Left Step Right. Loud powerful intro, followed by some restrained vocals and guitar and then full band participation, including ooh ooh ooh backing vocals. Lovely Rickenbacker guitar work and lead vocals from Robin Murphy.
Having two lead vocalists, and two main songwriters, The Hemulens setlist is quite varied, not in quality, which for a relatively new band is consistently high, but rather in delivery. Murphy's voice is the more melodic, but Lauder has an angst in his voice reminiscent of Tom Verlaine and Television. Shearer's exuberant drumming and Sandahl's understated Gretsch bass both underpin a really tight playing unit. 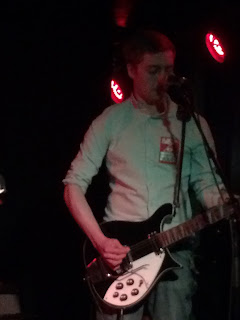 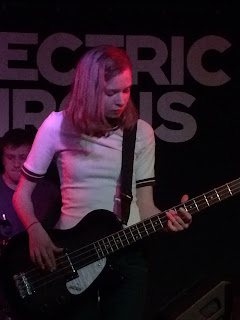 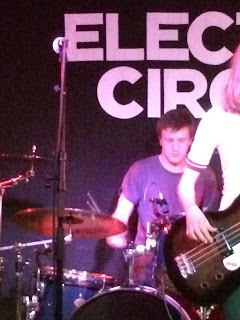 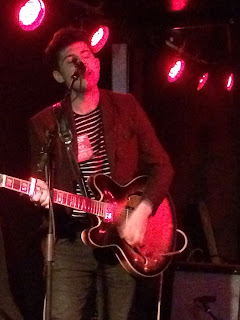 The thing that stands them apart, from many other indie bands on the scene just now, is the quality of the songwriting.

Highlights for me were Eve's Dressed In Red (definitely future single material), and the single launch tracks She Said and Some Kinds Of People.  Some Kinds Of People had glorious Gibson guitar riffs and vocals, while She Said had a lovely driving rhythm, more good guitar work and a slightly more melancholic feel, but drew the crowd closer.

The track Kane, which Murphy announces as "this is one of our newest songs" was wonderful. If this is the standard of their new material, I can't wait for the next release.

Bearing in mind that I'd only heard brief previews of two songs before this gig, I was really impressed. On this showing The Hemulens already have enough quality material to release a good album. A point which I mentioned to Robin Murphy after the gig. He said they'd love to - they just need the money and the time together to do it.

Help them out and buy the single here https://thehemulens.bandcamp.com/ and when they're headlining bigger venues in the future, you'll be able to impress your friends with "Oh yeah, I've known about The Hemulens since early 2015 - I've got their first single!"

Empire By Day are an emerging four-piece from Edinburgh. The band consists of Conor Joss on lead vocals and rhythm guitar, Scott Cowie on lead guitar, Kieran Lewis on bass and Cameron Barnett on drums. They previously released their Silver Linings EP in July 2014 but this was the launch of their new single Mirrors released 23 March 2015 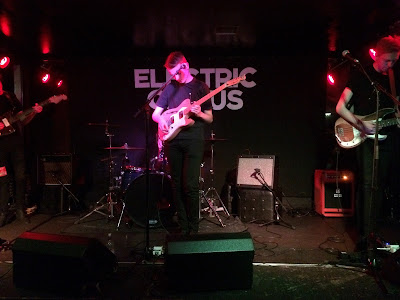 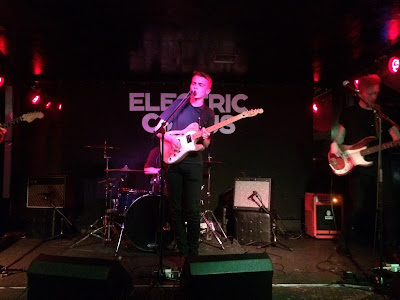 Empire By Day were the headliners at this gig to launch their new single Mirrors, and had a good following of friends and family. There was some good natured banter as the lads took to the stage, but they didn't waste time launching into Fade Out, from their 2014 Silver Linings EP.

All their songs provided interesting degrees of light and shade, with quiet interludes of minimal guitar and melodic vocal harmony breaking up the powerful bass, drum and guitar riff driven sections. Scott Cowie's riffs and Conor Joss's vocals regularly provided melodic catchy hooks.
Got Me Down, Young and Mirrors were my favourite songs on the night. 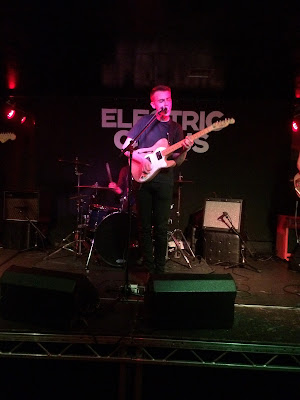 Mirrors reminded me of The Blue Nile in style and vocal delivery, and the guitar sequence on Got Me Down could have been a Two Door Cinema Club tribute, but there is no hint of deliberate emulation, the lads always put their unique stamp on each song.

Smile of the evening was when bass player Kieran shouted something to the cheery hecklers, but we couldn't quite hear what he said. Conor Joss responded "I don't know what he said, but it was Kieran so it probably wasn't funny". Cue "Oohs!" from the crowd.

Empire By Day are destined to be better known. Try to catch them while they're still playing the small venues.

Setlist:
Fade Out
Got Me Down
Ivy
Young
Mirrors
Night

Causeway Trio are a three-piece band from Edinburgh blending Scottish traditional music with a diverse range of influences, from jazz, gospel and rock to 20th century classical, minimalism and Eastern European folk. Some examples here.


Pàdruig Morrison hails from the Outer Hebrides island of North Uist, where he was raised playing accordion and speaking Gaelic, developing a knowledge of traditional music from an early age. By contrast, classical guitarist Peter Thornton honed his skills in an eclectic mixture of acts, including a Christian metal outfit and playing trombone for several big bands. The jazz component comes courtesy of pianist and percussionist, David Swan.


They took to the stage quietly and, as the opening act, played to a fairly sparse crowd. Which was a shame as they provided some beautiful music and very eclectic sounds.
Pàdruig Morrison did most of the chatting, mentioning what the songs were called and which of the trio had written them.

They often played 3 or 4 songs which segued into one longer piece of music, almost like movements in a symphony. They provided a real roller-coaster of influences, as mentioned above, but the compositions which stood out for me were the ones with jazz and Eastern European folk influences.

Glorious stuff, and when they provided combined vocal harmonies on the last song Hay Bales, the audience were enthusiastic in their support.